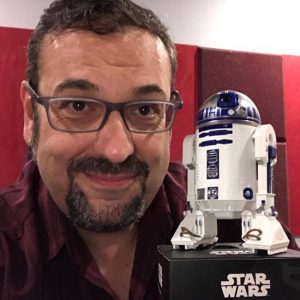 We had a chance to talk with Tracy W. Bush, audio director at Sphero, and get details on how he created the emotional language for Sphero’s newest and hottest line of Star Wars toys.  Tracy Bush is a seasoned industry veteran, who’s held key audio positions at 5th Cell, Sony Online, NCsoft, and Blizzard.

When did you first figure out that you wanted to make sounds and music for a living?

I was always playing music when I was a kid, always wanted to be a musician. My parents had planned on a doctor/lawyer track for me, but my grandmother was the first person who suggested to me that I could actually be a musician professionally if I wanted to. I’d always cared about sound and voice and stuff, but it wasn’t until I started playing the LucasArts games in the mid 90’s that I really wanted to have a hand in doing some of that work.

You’ve worked on many hit projects like World of Warcraft, Starcraft, and the Scribblenauts series of games. Is there a common thread that connects all your work on these projects?

I’ve always tried to work with companies that are committed to the craft of storytelling. That we’re playing the game is not as important as WHY we’re playing the game. The nuts and bolts of stories, the things that move you. That’s what I’ve always been attracted to, and I’ve tried to follow that as much as possible in my career. Admittedly, we don’t always get the opportunity to make those kinds of games, but I try to.

We understand that the Force has been strong on your most recent series of projects. Could you tell us what you’ve been doing recently?

In this last year at Sphero, we’ve released seven products, four of which were in the Star Wars universe…BB-9E, the evil ball droid; R2-D2, and R2-Q5, the evil R2 unit. It’s been an exciting and busy time here, but we’ve worked very hard to capture the essence of all of these droids as perfectly as we can. 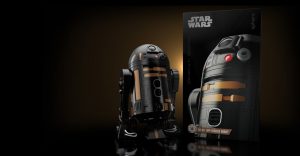 What was the production process like for developing the audio for the Star Wars toys?

With BB-9E we’re still kind of in the dark (since the movie hasn’t come out yet, and there’s only so much they can tell us without spoiling the plot), so we sort of had to shoot from the hip in developing a language for 9E and deriving his animations…given that we haven’t seen him in action yet, there was a lot of guesswork.

R2 was a different story, since we know so much about him. My first job was to go through all of the audio that we could get from Lucas (which was everything…they literally gave us every sound R2 ever made) and then turn THAT into some kind of language. I assigned most of his sounds into 9 distinct emotional sub-categories, and the animations call from them depending on what R2 is feeling. There are “signature” R2 sounds that get their own animations, but largely the system was devised to be as robust as possible so that it sounded like you were getting new stuff all the time. Most of those animations are waiting to be put into the app that controls him, so that you’re not seeing 1/10th of what he can do out of the gate.

Which is to say nothing of designing the acoustic enclosure, and mastering the sounds to that enclosure, plus the physical troubleshooting we had to do to make it work properly…honestly, I could talk for hours about this.

You use Varantic to make sounds for Sphero’s newest Star Wars droid, the R2-Q5. Can you tell us a little bit about how you did this?

I was able to generate the hundreds of sounds I needed based on the 40 seconds of audio I’d been supplied with from Lucas.

R2-Q5 was very, very tricky to make. There isn’t a lot of source audio for him, and I tried to reverse engineer those sounds, but without knowing how they generated those sounds it was ultimately a pointless endeavor. Our turnaround time on Q5 was very very short, and as I was running out of ideas on how to generate the massive amount of audio I was going to need in order to make him a fully engaging experience, I remembered Varantic and its various applications. I’d thought of Varantic in some games I was using before, but those never got past pre-production phases, but this application was exactly what the tool was designed for. I fed in what source data I had for R2-Q5, and after a few attempts with timing and setting some other parameters, I was able to generate the hundreds of sounds I needed based on the 40 seconds of audio I’d been supplied with from Lucas. They were happy with how it turned out, and we were able to make him his own unique self, well within budget and before deadlines. I couldn’t ask for anything more.

Fortune.com just called the R2-Q5 “Hardest Holiday Toy to Buy.” How does that make you feel? 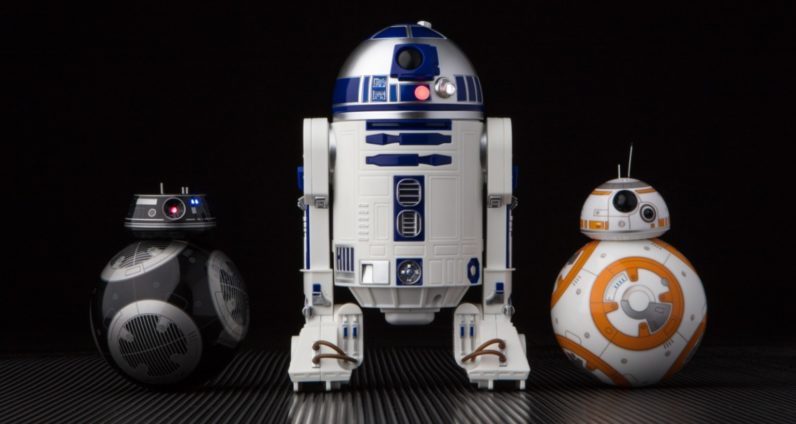 Pretty good! I’ve been fairly lucky in my career to have worked on some big properties and successful projects, but every time something does this well it’s a surprise. I’m concerned, however, that I may not be able to get one myself…

I get to move invisible waves of air and make people feel things. If that isn’t magic, I don’t know what is.

Robert Rice makes the “scariest game ever” in Paranormal Activity: The Lost Soul Richard Ludlow talks about bringing the world of Blade Runner: Revelations to life with sound

Richard Ludlow is on a roll. From triple-A video games to films to commercials to television, Richard has a laundry list of credits in every media field. His team at Hexany is pushing the old-school boundaries of sound, with a great deal of new-school work on virtual reality simulations. Hexany is no stranger to huge […]

Thanks for agreeing to this interview.  Would you tell us when you figured out that you wanted to make sounds and music for a living? It didn’t happen overnight.  I’ve been making noise and playing games my whole life and never planned to do it for a living.  It’s something I genuinely love and inadvertently fell into professionally. Around 2007 I started gigging as a solo electronic artist in clubs and warehouses in Charleston, […]