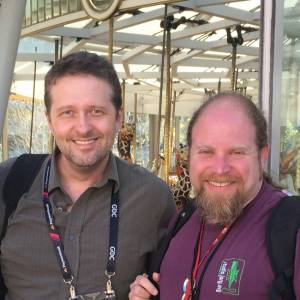 This picture was taken about a month ago.  It was the last time I got to see Jory.

Many others have already spoken well about him.

Jory taught mostly by example.  Jory never wrote the following rules down, as far as I know.  But this is my interpretation of how he treated me, and how he treated others.

I hope that Jory can help you as well, the same way he helped me.

Here is what he taught me:

1. Listen most carefully to the people who criticize you.

Sound designers generally get two kinds of feedback in this industry.

The first kind is “That’s awesome! Your stuff is great!”

And the second kind is silence.

But ever so rarely, we get another form of feedback. That form is sympathetic criticism.

Criticism, in the general case, is very hard on artists and creators.  Criticism implies that you have been unwise in how you have spent your time. It implies that you should be better at your craft than you are.

But this implication need not be so in practice.

Jory demonstrated to me that, if you’re careful and accurate and intelligent and warranted, criticism is one of the kindest gifts you can bestow on someone growing in their craft.

If someone asks you for your opinion of their work, you have an obligation to be as detailed and as precise and as helpful as you possibly can.

Intelligent criticism is also the kindest gift you can receive. A person already skillful may only continue to improve their craft through criticism.

Remember: criticism must never be about tearing a person down.  Criticism is always about finding ways to make them stronger.

Remember: it takes extreme bravery to even dream of doing something new or creative.

Only provide criticism from within that understanding.

The medium is less important than the message.  You might create a web site, or make video tutorials, or do presentations at a game conference.  Or you might merely meet up with friends and talk about what you’ve done and what you’re doing.

Whatever sound design problem I was trying to codify and formalize, Jory already had a spreadsheet he was willing to share.  This is how I solved this problem, he said.  Here, start with what I’ve already done.

Jory figured out that there was a future in web-browser based audio synthesis, before about anyone else did.  So he created the principal Internet reference on it.  He interviewed people, he put up content, he shared discoveries.

Jory spoke at conferences.  Listen, I’ve learned a thing or two.  Let me tell you all about it.

When you share your best ideas, a surprising and unlikely thing occurs: you gain followers and partners and dreamers who share your visions.  And suddenly you have more minds than just yours, helping to solve your own problems.

When you become proficient, teach.

When you achieve a certain level of success in the industry, you will begin to have recent graduates, hobbyists, and other assorted amateur dreamers come to you, and ask you for favors.

It is vitally important that you help these people.

Why should you do that?  You’re busy.  You’ve got deadlines, and projects demanding attention, and honestly you’re too darned busy to deal with more requests from people who can’t do anything for you.

Jory talked to, and listened to, everyone.  Didn’t matter if you had hundreds of titles under your belt or whether you just stepped off the bus from Waukeegan with a copy of Reaper on a laptop.  If you had something to say, or something to ask, Jory’d treat you just the same as everyone else: you were Worth His Time.

You’ve been lucky, but only because others have helped you be lucky.  You always have to put the karma back where you found it.

That’s what I learned from Jory.  Did you know him?  If you did, and you got your own lessons from him, please feel free to add what you learned from him in the comments below.

Digital signal processing in a spreadsheet: an experimental toy Can you convert between sample rates by skipping samples?