Here is a well-known fact about me: I love Batman. In Batman Beyond, one of his enemies is a sound designer. No, I’m not kidding. His name is Shriek; his principal weapon is sound. He has the ability to enhance or dampen any type of sound. And when he goes mano-a-mano with Batman, Shriek uses the suit to create a zone of silence to fight in.

Silence, used correctly, is a powerful tool. Silence is good for creating tension. But what about when you need a calm silence? Silence is uncomfortable; there’s a reason we call it “awkward silence.”

A few hours ago I woke up, and there was no electricity in my apartment. Typically, my apartment constantly has fans and motors whirring and buzzing. The silence was deafening. 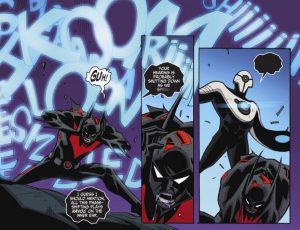 When people believe that they hear silence, they really aren’t. When you are indoors in a so-called quiet room, if you listen into the silence you will typically hear a computer fan, an AC unit, fluorescent lights, or a refrigerator humming.  And even in an isolated, sound-proof booth, you will still hear the sounds of your own breath, and maybe even your own heartbeat.

Every sound designer knows to fill these voids with a little ambience. In a forest? Bugs and bird song. In an abandoned house? A little bit of creaking, wind whistling, and groaning of wood.

But what about when it needs to be “silent” in a scene?

The right music helps direct the emotional response of your audience. The Artist is a “silent” film that included dramatic music throughout. Imagine a scene of an old abandoned theme park, a carousel long forgotten, add the faint echoes of the music it once played and it makes the scene seem even more quiet. The music you choose could make the park calm, exciting, romantic, or scary. You get to set the tone.

No music budget? Want it even more silent? Or just want a challenge? Try looking into the symptoms of tinnitus.

Tinnitus is the sound perceived in the human ear when no external sounds are present. Tinnitus can occur after prolonged exposure to loud sounds. Some people perceive it as ringing in the ears, but it can also be buzzing, clicking, chirping, hissing, humming or whistling.

To create your own tinnitus mix: Play a steady tone very quietly to mimic the ringing in your ears after exposure to loud sounds. Run a quiet rush of water through a low pass filter, simulating the blood flowing through your body. When all else fails, do a subtle chirp of crickets. These get the feeling of silence across without the discomfort of actual silence.

Have you used any of these yourself? Done anything like this in your work? Have something to add? Tell us in the comments section below.

Thou shalt not break this one law of audio design Crosshatching: when a mistake becomes music