The most important sound effect ever

I’m about to play for you the most important sound effect ever recorded.

You’ve heard this one, a million times before.

It’s your old friend Castle Thunder, of course. It was recorded for the movie Frankenstein in 1931 and it hasn’t changed a bit since then.

Have you ever noticed that Castle Thunder sounds nothing at all like thunder? It’s a long rolling shout, it’s very mid-rangey, without any of the exciting subwoofer-punching properties of real thunder. 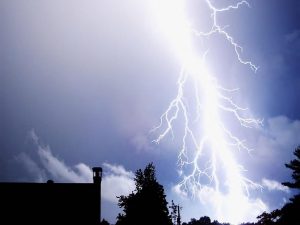 Thirty years before Castle Thunder was recorded, legend has it that a scientist named Ivan Petrovich Pavlov taught a few dogs that every time they were about to be fed, he’d ring a bell. And those dogs came to understand that the ringing of the bell meant that it was chow time. And they’d start to salivate.

Now you may think that was the way it went down. But that wasn’t actually what happened. Pavlov actually used a variety of stimuli, including bells, whistles, metronomes and tuning forks. Ultimately it didn’t matter whether Pavlov rang an actual bell or made some other kind of sound effect. Sound then food means that that sound gets associated with dinner time.

Hey, it’s been two minutes since you heard Castle Thunder. Here it is again:

What Castle Thunder sounds like is… a scary movie.

And it has sounded like a scary movie, to generations, and millions upon millions of people.  It’s a sound whose meaning has remained unchanged, ever since sound effects were first recorded for mass media.  That’s why it’s the most important sound effect ever recorded, even if Castle Thunder doesn’t sound like either a castle or thunder.

But if, every time someone rang a bell, something scary happened on that glowing screen in front of you… wouldn’t you start to think that bells sound scary?

This website uses cookies to improve your experience while you navigate through the website. Out of these, the cookies that are categorized as necessary are stored on your browser as they are essential for the working of basic functionalities of the website. We also use third-party cookies that help us analyze and understand how you use this website. These cookies will be stored in your browser only with your consent. You also have the option to opt-out of these cookies. But opting out of some of these cookies may affect your browsing experience.
Necessary Always Enabled

Any cookies that may not be particularly necessary for the website to function and is used specifically to collect user personal data via analytics, ads, other embedded contents are termed as non-necessary cookies. It is mandatory to procure user consent prior to running these cookies on your website.